#CivilDebates: How we came to a debate about arts boards

Last year, after the firing of Ken Gass from Factory Theatre, David Ferry and I exchanged open letters on this site. David’s letter, addressed to the younger generation of theatre artists, first appeared on Facebook.  He asked why the newer generation of artists was so silent on the issue. Was it apathy? Had he and his contemporaries failed the next generation by not setting a good example?

“How have I and my contemporaries failed in setting an example for you, so that you do not feel compelled to speak up in such a time?

Why do we as a community of artists have so little to say politically about our own institutions in comparison to similar communities from other cultures… USA, Britain, France, Germany as well as the non-Eurocentric communities of theatre artists in the world?”

I responded by saying I felt the issue was larger than the firing of one Artistic Director, and that an assumption could not be made that silence on one point was an indication of apathy on all points. I talked about this generation’s participation in Toronto’s Culture Consultations, about our work with TAPA & Arts Action Research’s Theatres Leading Change, about the Indie Caucus and our ongoing struggles to bring necessary changes to an important but outdated institution that is the Canadian Actors’ Equity Association, and more.

“This is not apathy, but a quiet community of passionate and dedicated artists working away at changing what no longer works. I am not silent, I sit on no fence, and I am not complicit. I’m just offering my voice to a different fight.”

While it was clear that neither of us was going to suggest the firing had been handled well, we certainly had come out on opposite ends of the spectrum in terms of what the response to the situation should be.

What was most compelling was the intense, articulate, and passionate debate that appeared in the comments sections of these posts. Across generations most commenters were willing to sign their names to their ideas and opinions. It became clear the greatest value to be derived from our disparate viewpoints was the space that was created between the two, allowing for discussion on all the murkiness and grey in between.

On Monday, April 1st, we’re bringing this discussion into a physical space and we’re asking our community to join us in that murkiness. The debate structure we’ve chosen, based on the Canadian parliamentary model, requires a bold, clear statement, allowing for our incredible speakers to address their opposing viewpoints with passion and rigour:

I want to be very clear about the nature of the discussion I hope this debate will engender. This is a complicated issue, and there is much to be learned on the topic. As a result, I feel I can’t say this enough: we are not coming together to argue. We are coming together to listen, consider and respond.

As we’ve mentioned in previous posts about Civil Debates, “just like the best acting, each debater should have a responsibility to hear the arguments that come before them and respond – not just deliver a prepared statement.”  Our goal is to address more than the firing of one artistic director, or one theatre, or events in one city. We’re addressing larger issues, the results of which could be seen in theatres across this country over the last few years.

Join us on Monday for this important and spirited discussion. I hope you will come with an open mind, a willingness to listen and learn, and even just the slightest chance that someone on this panel might change your mind, regardless of the perspective you came in with. 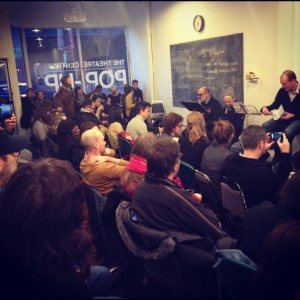