It’s Sunday afternoon, March 24th, and I’m sitting in the lounge at Billy Bishop Airport about to catch a flight to Montreal on Porter. I’m going to direct something in the city and I’m happy to have the chance to get away. The airport is always less crowded and chaotic than Pearson and Porter is so convenient it’s crazy! Everyone is dressing in his or her Porter best, the cappuccino is free and the lounge is comfortable.

I read a sign as I walked through: The Toronto Island Airport was the largest airport in Canada in the 1920s.

Just earlier as I had approached Porter pulling my two suitcases behind me, I noticed ahead of me a number of police officers in their day glow cop coats and a group of people gathered at the entrance where the cars and the taxis park. Then I saw they were holding pickets. It was a picket line. 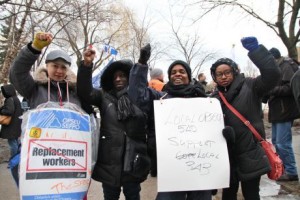 Now I have never crossed a picket line in my life (as far as I know). I remember at SFU when CUPE was on strike my best friend and I worried we would miss final exams if the strike continued. It didn’t. I have joined strikes before. I have supported many causes intent on protecting workers rights. I fully understand that labour is under attack in this present climate and that the rights and benefits workers have fought for years to gain are in jeopardy. And like I said I’ve never crossed a picket line. That was just the way it was when I was growing up. That was the golden rule.

Sunday I crossed a picket line.

Why? There are so many excuses. Does it matter?

I crossed a picket line.

I wasn’t brave about it. I snuck through the schoolyard so I wouldn’t be seen. I kept my head down. My suitcases dragged in the mud. On approaching the terminal I noticed the Porter bus from Union Station was parked just on the edge of the field with passengers getting on and off far away from the crowd of workers and their placards. People adapted easily and went about their business. The police smiled politely as if to let us know we were safe and not to be afraid of the striking workers.

As I scooted by two young men were handing out pamphlets. They were Porter workers. I took the pamphlet and said ‘Good luck you guys’. They smiled brightly ‘Thanks!’ I wanted to say ‘I’m so sorry I’m crossing the line here, really I am’. But I just put my head down and kept going.

Porter has hired replacement workers to do the work of those who are on strike.  As I made my way though the terminal I kept wondering ‘Are you replacing someone? Are you?’ As I made my way through the terminal hundreds of other passengers made their way to flights or returned home. People helped themselves to the complimentary snacks. And I wondered ‘Did anyone else cross a picket line for the first time today?’

ACTRA has asked its members to support the Canadian Office and Professional Employees Union, Local 343 by boycotting Porter. I haven’t seen anything from CAEA. I’m not on Facebook, don’t really follow twitter and there is very little about this strike in the media. So who knows about it? And how do we get the information out there? 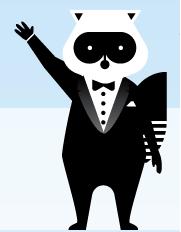 Those of us in the theatre love Porter. It’s so convenient. We fly to Montreal and Ottawa and New York.  Will this strike change that? Will we as a community boycott Porter? I plan to look into a train ticket for my trip home (a VIA Rail ticket can be as low as $39 one way if you book in advance and online).

I just wish I hadn’t crossed that picket line.

Fuellers at Porter have been on strike since January 10th. These workers get paid on average $13.00 an hour. Workers at Pearson doing the same job get $17.00 an hour. Numerous health and safety violations and poverty wages have forced the workers to walk off the job. In a letter to Porter President Robert J. Deluce, Sid Ryan president of the Ontario Federation of Labour states:

“A living wage that enables a household with two working parents and two children to live adequately in Toronto was estimated to be $16.60 in 2008. Workers at Porter, along with all working people in Ontario, deserve a living wage.”

If you want to support these workers you can call Porter at 1-888-619-8622 and ask them to return to the bargaining table or visit www.dontflyporter.com. And if you want some travel options check out Via Rail  or Air Canada .

« Variation #58: Carly Chamberlain
#CivilDebates: How we came to a debate about arts boards »