An end to arts funding? 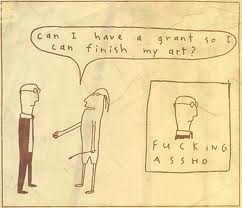 On August 14th, as part of SummerWorks Performance Festival’s Shop Talk series, I will be having a debate with journalist Andrew Coyne (Postmedia, CBC’s The National) on the question: “An end to arts funding?”.

Most of our revenue at STO Union comes from international festivals.  But any creations that we’ve made at STO Union, usually started with a small grant.

When I look at what STO Union has accomplished over the years, on paper, it looks amazing:  we’ve toured to the top festivals in the world, we’ve created small pieces that have long shelf lives and that bring in more revenue from fees than any grants they ever receive.  But the reality of the job is that it has been more of a vocation than anything else.

I left Toronto officially in 2004.  What propelled me out of the city was that I couldn’t stand seeing up close the capitulation of the art world to the market.

I had to find some kind of psychic ‘space’ that was still ‘free’, so I moved to a village in Quebec.

When I think ‘market’, I think of the square in my village where locals go to see their produce and wares.  Down the block, there are two churches, restaurants, entertainment venues and a community centre.    There are places of business, places for contemplation, places for entertainment, and a place for the community to gather.  There’s also a post office, a fire department, and a hospital.   I can see more sharply how society functions through the lens of the smaller scale that a village offers me.

What I am seeing is that the separation between what occupies human time is being eroded:  when you’ve placed ‘money’ at the top of your priorities, then everything becomes the ‘market’:  it affects the way we relate to each other, what we do with our time, how we work.  All interactions become subtly, (and sometimes not so subtly), defined by this.

The market takes over the territory and empties it out of its most precious and unique qualities, turning everything into ‘work’.  It’s like an invasion or an infection:  slowly taking over our relationships, our time, our attention until that is all that we see.  For me, as an artist, now is the time to respond to this, with all hands on board.

“Perhaps you disagree with my point of view – I can understand that you might be entirely resigned to the notion that capitalism will never be overcome. Maybe you have moved beyond this resignation into a full-blown cynicism. The impression you as artists give is often that everything has already been recuperated, that all radicalism is produced broken, that all resistance is already integrated into the capitalist whole. Your works often make the claim of regretting this, but it is a false claim insofar as it is a process to which they happily contribute. Clearly, few of you are actually interested in a critique of capitalism (but a pseudo-critique that sells will have to do), but for those of us who care about art, for those of us who think that art’s critical capacities have not been exhausted and extinguished, for those of us for whom the abolition of capitalism is not a choice but a necessity, you are the enemy.”

The debate I am having with Andrew Coyne is based on completely insane premises:

Ultimately, the concept of ‘we don’t feed those who bite the hand that feeds them’ makes all funded art-work ultimately impotent.  If it becomes too potent the funding will be withdrawn.

For myself, capitulation to the market has nothing to do with what ‘the people want and are willing to pay for’, it has to do with surrendering our last strongholds, the last bits of territory that the market doesn’t fully control.  Without those free and open spaces, we are all just slaves in denial.

Nadia Ross is the artistic director for STO Union, one of the company’s at this year’s SummerWorks Performance Festival (7 Important Things).  She lives in Wakefield, Quebec.

*Note the printed SummerWorks Guide incorrectly lists this debate as being on August 11th – it is in fact on August 14th at the Performance Bar at 5pm.