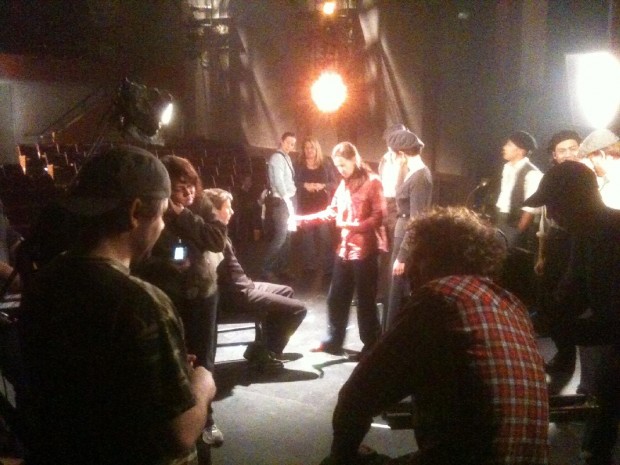 The Electric Company Theatre‘s Kim Collier is the fourth director in Canada to receive the Siminovitch Prize in Theatre.

There is no more prestigious or lucrative prize in Canadian theatre than the $100,000 Siminovitch Prize. The annual award cycles through directors, playwrights and designers each year. This year, it was awarded to a professional director who advances Canadian theatre through a body of work achieved in recent years, while influencing and inspiring younger theatre artists. $25,000 of the award must be awarded to a protege of the winner’s choice – this year Collier chose director and The Chop Co-Artistic Director Anita Rochon.

Both Rochon and Collier work out of Vancouver’s Progress Lab 1422, where Rochon is also Associate Artistic Producer with Rumble Productions . Neither director is stranger to Toronto: Collier’s No Exit dazzled at Buddies last year while her Studies in Motion comes to Canadian Stage in November. Meanwhile Rochon’s Kismet One to One Hundred wowed audiences as part of Free Fall last year at The Theatre Centre.

Congratulations to both, and indie theatre in Vancouver a little bit too.

Kim Collier
Prior to her career as a director, Kim studied acting at the University of Victoria, physical theatre at Mime Unlimited in Toronto and in 1994 graduated from the 3 year acting program at Studio 58 in Vancouver. A year later she co-founded Electric Company Theatre whose work quickly became recognized nationally as a driving force behind the resurgence of activity in Vancouver’s independent theatre scene.

Under the direction of Collier, the company has created a dozen original works through an intensive collaborative process including three landmark site-specific productions. Kim also has a growing presence on major stages and festivals across Canada with productions at Theatre Calgary, Festival TransAmerique, National Arts Centre, the Citadel Theatre and Canadian Stage. In 2011 her live-cinematic interpretation of No Exit is being presented by the American Conservatory Theatre in San Francisco. Kim is the recipient of multiple awards including three Jessie Richardson awards for directing, a Betty Mitchell for Best Production and in 2009 the Vancouver Mayor’s Arts Award.