Tear The Curtain TO

Two years ago, as part of a Canada Council-supported Director in Training residency at The Tarragon Theatre, I was shipped out to Vancouver to learn more about how the technical aspects of theatre-making were being approached out West. I was paired with The Electric Company, where I became assistant to director Kim Collier while we were shooting the film sections of an in-progress theatre/film hybrid. (During The Olympics!) 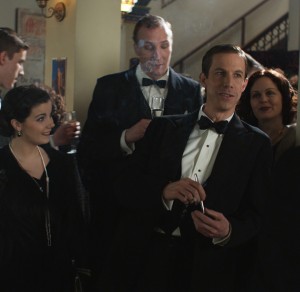 My film scene has been cut from the 2012 production!

I pretty much immediately fell in love with the company/production/script and so I was thrilled when they asked me to come back and continue as Assistant to The Director for the rehearsal process at Progress Lab leading up to opening night at The Arts Club’s Stanley Theatre in September 2010.

Anyhow, longtime praxistheatre.com readers know this already because, of course, I blogged the heck out of that whole experience.

Two years later the production is coming to Toronto as the opening production of The Canadian Stage season at The Bluma Appel Theatre and really, I am quite excited. This super-cool medium-bending production I was a part of that none of my friends and colleagues have seen is finally coming here.

Even better, I will be joining the production when it moves into the theatre to begin teching into the space.

I’m hoping that my experience as assistant director on Peggy Pickit Sees The Face of God in The Bluma Appel last year, combined with my knowledge of Tear The Curtain when we put it together originally will make me useful. The cast is rehearsing in Vancouver first, so I will be playing catch-up. If nothing else, I can still hopefully provide some interesting online updates.